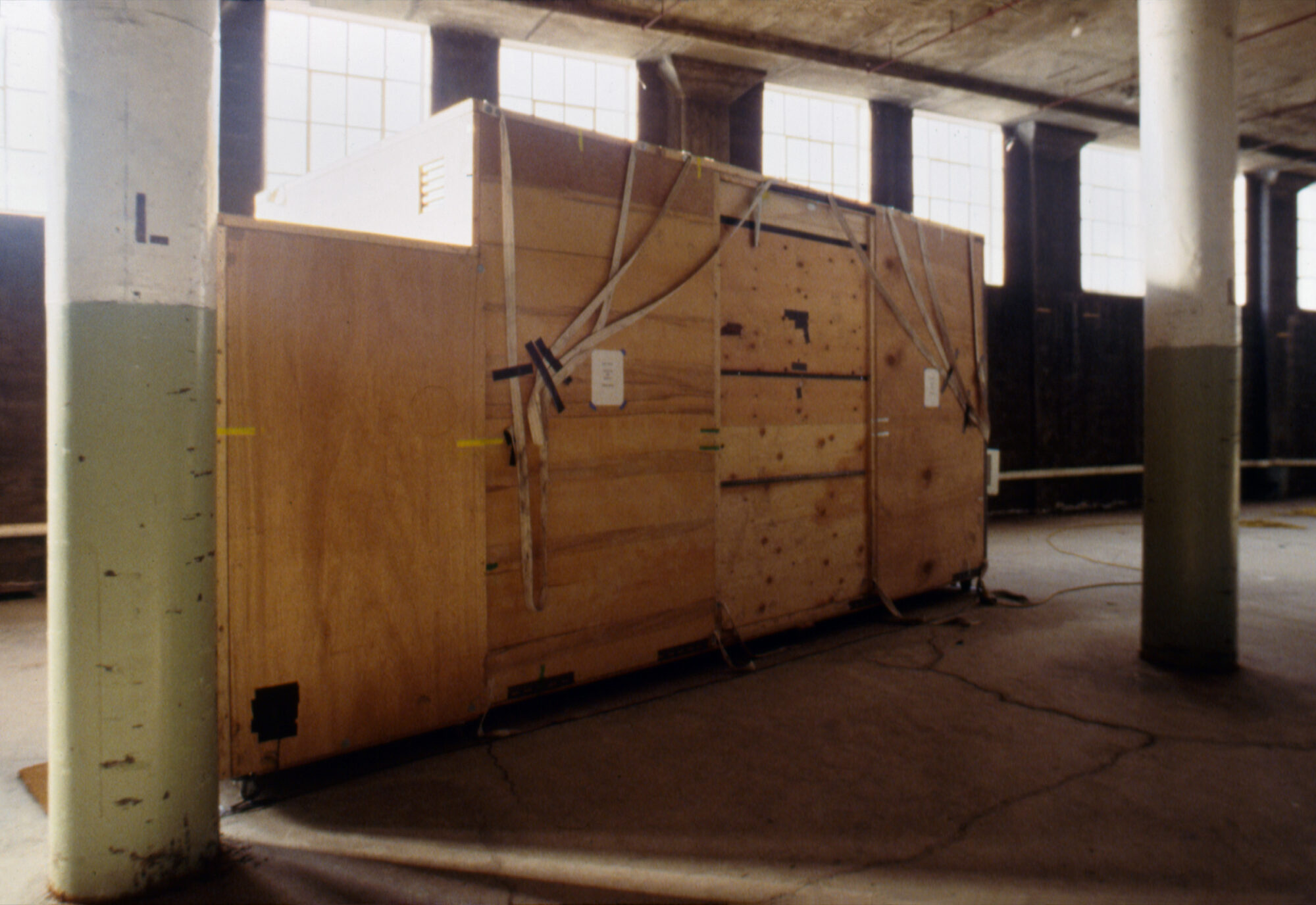 Invited to collaborate with the Dia Art Foundation in 1999, Vera Lutter created a set of large-scale images inside the former Nabisco factory in Beacon, NY. Originally a cardboard box printing facility, the factory was abandoned in the late twentieth century. Dia later renovated the building to display its collection of 1970s art. When Lutter worked in the factory, she was the only person in the vast empty space, which she viewed for hours from the inside of her camera obscura. Lutter’s photographs reflect the moment in the life of the building as it stood somewhere between utilitarian industrial architecture—a historical remnant—and an idealized cultural space.

Built in 1929, the factory was developed as a model for many more such facilities throughout the United States. A sweeping expanse of north-facing skylights floods the ground floor in natural light. This aspect of the building’s architecture designed to make an effective workspace, later became a determining factor in Dia’s decision to appropriate the site. Despite the well-illuminated space, the sheer size of Lutter’s images required exposure times lasting up to four days. In Nabisco Factory, Beacon III: September 8–12, 1999, the clock displays no time because it had been spinning for days, causing the constant turning of the hands to be lost in the duration. After the building lost power during a hurricane, a later exposure details the same clock, but this time recorded with the hands frozen as if time itself was suspended. In Nabisco Factory, Beacon I: July 19–22, 1999, Lutter captures the vastness of the building as it lies void of life with only a few pieces of furniture lined up for reuse, engaging with the monumentality of the space. The artist’s images explore issues of scale and allow the viewer to step back and more readily see space in terms of abstract form and tone.

In contrast to works produced on the ground floor, the photographs made in the basement took three months to expose, during which Lutter would regularly visit the process, finding small variations in the otherwise immense and untouched basement. These images offer a particularly strong impression of the space resulting in photographs that mysteriously glow of light. Each column catches the changing light from the west facing windows, animating the room with the shadow lines cast around the columns like sundials.  In this way, Lutter’s images underscore how the source of light illuminates the appearance of space. Foreshadowing the dialogue Dia:Beacon continues to have with minimalism, the repetition of austere columns on a grid creates a perspective point similar to that of Renaissance imagery and provides order and balance to the images. The negative prints lend the room an almost ephemeral quality as if each column supports little more than air, granting the industrial space a delicacy not otherwise there. It is this paradox of content—transforming concrete walls into veils of light—which lies at the core of much of Lutter’s work. As curator Lyme Cooke quotes Walter Benjamin in her essay on the artist’s Dia exhibition: “Therein is unmasked the posture of photography that can endow any soup can with cosmic significance.”